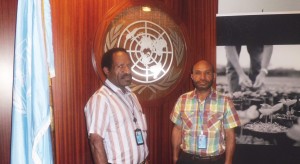 In response to appeals from MiningWatch and many other groups, the Office of the United Nations High Commissioner for Human Rights has issued an opinion regarding the framework of remediation initiatives developed by Barrick Gold Corporation for women who have been victims of sexual violence by security personnel at the company’s Porgera mine in Papua New Guinea. The opinion makes some important positive contributions but also raises some serious concerns. Here’s the OHCHR opinion, and our letter in response.

Letter to UN High Commissioner for Human Rights of September 4, 2013