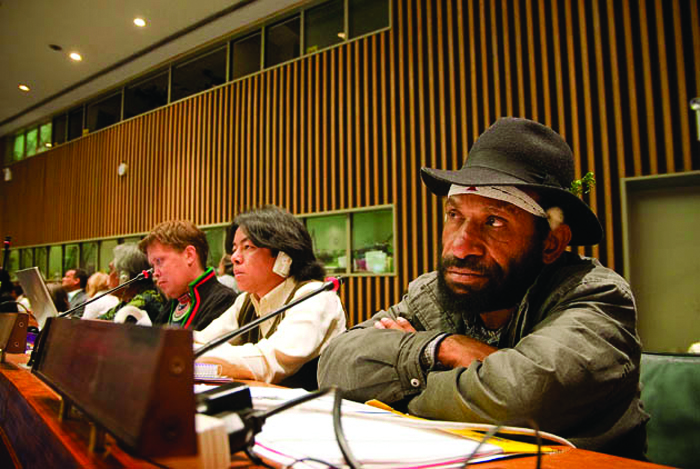 Surprise but not surprisingly, Mr. Kikala seems to have gone off the track in his attempt to answer numbers of sensitive issues connected with the operation of the Porgera Gold.

The decision to sale 5% shares in Mineral Resources Enga was decided on pure commercial reasoning by the MRE board. We understand that the Porgera mine is lucrative but we have not seen any dividend benefits over the last 7 years from the shares. Year in-year outâ€™ cash calls from the major shareholder and the joint venture partnered of the mine has become common practice and, we the Porgera Landowners Association representing about 10 000 people of the Special Mining Lease Area wish not to be seen stuck with 2.5% shares whilst no benefits. Window dressing and waste of time in holding unto the 2.5% equity.

I understand the nature of the Ok Tedi deal; BHP excited from the Ok Tedi mine free off loading some 63.4% ownership right to settle out of court after class action by the people of the Fly River delta. The PNG government reached a deal with BHP guided by an Act of Parliarament known as the Ok Tedi Act and PNG Sustainable Development Trust set up.

Apparently, Mr. Kikala was given the mandate in 2007 and whilst being fresh and in form with the ruling NA government, the opportunity was there for him to hold grips on the issues affecting the Porgera mine and the people of Lagaip-Porgera if he was that genuine. The landowners have been struggling with the mining impacts for some time and we cannot continue to hold on to shares that are of no value. I recall that at a public rally in Laiagam in September 2008, Mr. Kikala cited that, Barrick (PNG) Limited was big brother to him and he was smaller brother to Barrick.â€ So by way of selling the 5% share to Barrick could mean we are trying to make his big brother even bigger.

Moving on to the points of MOU Review and Resettlement, I appreciate the call by the local MP but than, his statement gives rise to a very serious question how genuine is he? What really prompted him to make a call at this juncture when the Mining Minister, Honorable John Pundari is providing the leadership and the MOU Review is expected to commence mid January 2011.

Despite Mr. Kikala is correct in pointing out that landowners are living inside the SML, the issues are not new and his statement was not a surprise call. In numerous petitions to the government, Porgera Landowners Association has repeatedly demanded for the MOU review and a comprehensive resettlement package from the National Government and Barrick PNG Ltd.

Politicians like Mr. Kikala should not size the opportunity for political convenience. Before he became an MP, Mr. Kikala was Porgera Project Coordinator, Deputy Secretary in Enga, National Planning Secretary and member of the Porgera Investigation Committee in 2006. Mr. Kikala was well acquainted with the issues affecting the landowners and yet he pretended to know nothing. I begin to wonder at one stage Mr. Kikala made a statement in Parliament in May 2010 that, â€œfour Porgera landowner leaders have visited Canadaâ€™s House of Commons and trying to sell fabricated stories.â€ He even went on the extreme of asking the Foreign Affairs Minister to prosecute the four leaders.

I was amongst one of the four Porgera leaders who visited Canada between April-May 2010 and raised the issue of MOU Review and Resettlement with Barrick Senior Executives at Headquarters in Toronto and with like-minded Politicians and senior civil servants in Ottawa. Now I find Mr. Kikalaâ€™s statement contradicts him. The four Porgera leaders where not in Canada at that time trying to sell fabricated stories but raise serious issues that are affecting the SML landowners.

Hence, the issues of MOU Review, Resettlement, and the failed FIFO program at Paiam are all part and puzzle of the Porgera Landowners Association Position paper before the Mining Minister for renegotiation purpose start mid January 2011. For benefit of Mr. Kikala, I suggest he visit this web site; www.porgeraalliance.net.

Otherwise I appreciate the leadership that has been provided so far by Honorable John Pundari, Minister for Mining within his brief period at the ministry and the initiatives taken to move forward to address issues affecting the SML landowners in Porgera.

Finally, I ask Mr. Kikala to allocate some funds from the Lagaip-Porgera JDBP to assist the PLOA Land Negotating Committees for the MOU Review. The outcome of the MOU is off course, Rural Development.