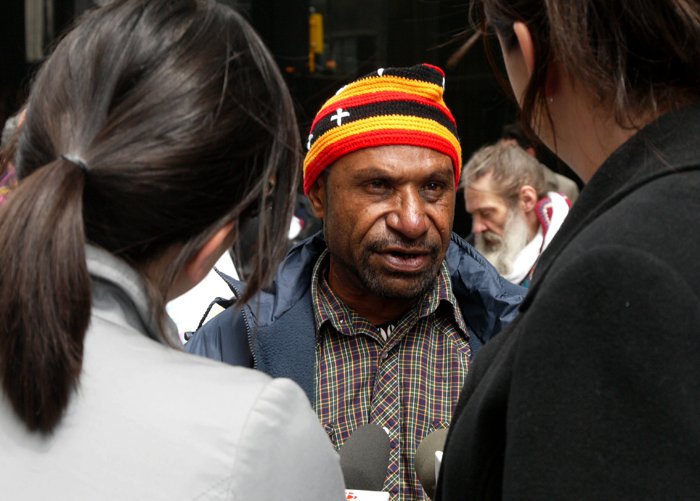 Allegations of rapes, beatings and killings of community members by Porgera Joint Venture (PJV) security forces have been prevalent for at least a decade. In a news article in 2005 then-mine operator Canadaâ€™s Placer Dome admitted to eight killings of community members by PJV security guards. 1 Early in 2006 Barrick Gold took over the mine when it acquired Placer Dome. There have been further allegations of killings and rapes by PJV security forces since 2006. Most of these cases have never been investigated.

In October 2009, Tyler Giannini from Harvard Universityâ€™s International Human Rights Clinic and Sarah Knuckey of the Center for Human Rights and Global Justice at New York University testified before the Standing Committee on Foreign Affairs and International Development about the serious human rights abuses associated with the mineâ€™s security forces including rapes, gang rapes, physical assault and killings. (see

In February of this year Human Rights Watch released a report that further confirmed the prevalence of allegations of rape by the Porgera mineâ€™s security guards. Human Rights Watch found that â€œBarrick has responded to legitimate human rights and environmental criticisms of the Porgera mine with a â€œshoot the messengerâ€ approach, attacking the companyâ€™s critics while failing to address important substantive concernsâ€ (p. 62). After years of denial, this preponderance of evidence has caused Barrick to start to respond.

However, while the company now acknowledges the occurrence of rapes by its security forces, we remain concerned about the attitude the company has taken to these events. In February Chairman peter Munk told the Globe and Mail that in Papua New Guinea â€œgang rape is a cultural habit.â€

Barrick has yet to acknowledge any responsibility to remedy the harm that has been caused to numerous individuals and families as a result of violence by mine security guards in Porgera.

Forced Evictions and House Burnings in 2009

In April 2009 more than 200 troops including 4 mobile units, an air tactical unit and intelligence officials from the PNG Defence Force were deployed in Porgera in an operation named â€œOperation Ipili â€™09.â€In this operation people were forcibly evicted from their homes and more than 300 houses of villagers living in Barrick Goldâ€™s mine lease area were burned down. Barrick Goldâ€™s PJV mine hosted these military forces and provided food for them and is thus complicit in these gross violations of human rights. This has been written up in a report by Amnesty International (for a copy of the report see http://www.amnesty.ca/amnestynews/uplod/ASA340012010.pdf ).

Two years after Amnesty Internationalâ€™s report, Barrick is still housing, feeding, providing fuel and a stipend to the state forces that were involved in these forced evictions and house burnings, even as fresh allegations against these troops of violence and renewed house burnings continue to surface. Barrick needs to cut financial ties to these state forces or risk being complicit in their abuses.

The Porgera Joint Venture mine empties millions of tons of tailings and mountains of waste rock directly into the nearby 800 km-long river system. The waste enters the Porgera River, which drains into the Lagaip River then into the Strickland River and eventually into the Fly River before reaching the Gulf of Papua, 800 km from the mine site. Dumping into this major river system began in 1992 and has continued unabated ever since. This practice would not be permitted in Canada and is having a severe impact on the river system and on the food security of downstream communities.

In 2009, Norwayâ€™s Government Pension Fund dropped its shares in Canadaâ€™s Barrick Gold as a result of Barrickâ€™s waste disposal practices at the Porgera Mine. Based on an in-depth assessment of Barrickâ€™s operations in Porgera, the pension fundâ€™s Council of Ethics concluded that investment in Barrick amounted to â€œan unacceptable risk of the Fund contributing to serious environmental damage.â€ The Council added that â€œthe companyâ€™s assertions that its operations do not cause long-term and irreversible environmental damage carry little credibility. This is reinforced by the lack of openness and transparency in the companyâ€™s environmental reporting.â€ The Government Pension Fund had owned more than $229 million (Canadian) in Barrick shares. (For a copy of the report see: www.regjeringen.no/upload/FIN/etikk/recommendation_barrick.pdf.)

The Need for Resettlement

Given extreme environmental degradation around the mine, water contamination, loss of land for agriculture and food security, health concerns and the security concerns related to violence by the mineâ€™s security forces, the landowners living within the mine lease area have been asking to be resettled elsewhere according to international standards. However, Barrick is refusing to undertake a full relocation. While it is known that Barrick hired consultants to review the relocation possibilities little information about the findings of these consultants is being shared by Barrick. Barrick is now seeking to relocate smaller groups of people only as their safety becomes directly affected by the mineâ€™s operations. This is unacceptable to the landowners in the mine lease area.

On March 1, 2011 the Porgera Landowners Association, the Akali Tange Association and MiningWatch Canada filed a complaint, called a request for review, with the Government of Canadaâ€™s National Contact Point for the Organization for Economic Cooperation and Development (OECD). For a copy of this document see