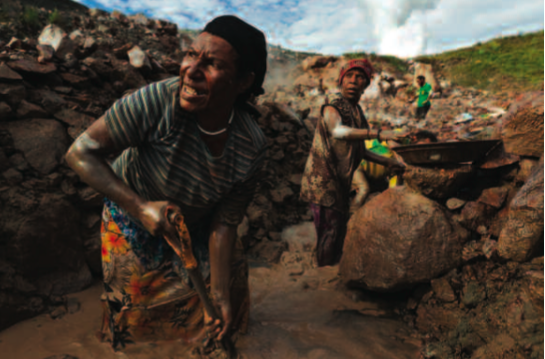 Ottawa) A report released today by Human Rights Watch confirms allegations of gang rapes and other human rights abuses by security guards of Barrick Goldâ€™s Porgera Joint Venture (PJV) mine in Papua New Guinea (PNG). This important report represents but the latest attempt to raise public awareness about these long standing abuses at the mine. Until now, Barrick and the personnel of the PJV mine have responded to numerous credible attempts to alert the company to the abuses of its security personnel with denial and, frequently, by attempting to discredit those who raised the issues.

â€œWe already alerted Barrick in 2005 to serial killings being perpetrated by PJVâ€™s security guards before Barrick took over the mine from Placer Domeâ€ says Jethro Tulin of Akali Tange Association, a local human rights group. â€œWe sent Vince Borg and Grey Wilkinson of Barrick Gold a letter and deposited our report called â€˜The Killing Fields of Porgera Joint Ventureâ€™ in the office in Port Moresby so that Barrick would know what was going on.â€ Pressure by members of Akali Tange Association and Canadian media attention, among others, contributed to an investigation by the PNG government of the alleged killings in 2006, but that report has never been released.

Since 2008, Jethro Tulin has been travelling to Canada yearly to speak in front of Barrickâ€™s board of directors and shareholders at the companyâ€™s annual general meeting. At these meetings Mr. Tulin has consistently raised the alleged killings and rapes by the mineâ€™s security guards, only to hear Barrickâ€™s directors assure shareholders that these allegations are false. Mr. Tulin has been accompanied in Canada by Mr. Mark Ekepa, the chairman of the Porgera Landowners Association for landowners living within the mineâ€™s lease area. Mr Ekepa too has repeatedly challenged the local mine management and Barrick Gold to acknowledge abuses perpetrated by the mineâ€™s security forces and take action on behalf of victims. Both men have met with senior Barrick executives in Toronto on two occasions.

In response to a letter in May 2008 from Mr. Ekepa to Barrickâ€™s then-President and CEO Greg Wilkins, the Porgera mine manager responded to Mr. Ekepa saying, â€œwe found your public allegations of our employees â€˜gang rapingâ€™ Porgera Land Ownersâ€™ women to be most distasteful, to say the least, as you know these allegations to be untrue.â€

â€œI have done what I could for many years to raise the abuses by the mineâ€™s security forces with Barrick Gold executives, shareholders, and Canadian civil servants and members of parliament and my own government officials,â€ says Mark Ekepa, â€œAs recently as June 5th 2010 I wrote to the mine manager about the rapes of three young girls by PJV engaged members of mobile squads.â€

While Barrick denounced allegations by local Porgeran leaders, the company also declined to investigate the activities of its security forces, even in the face of a three year investigation into the alleged killings and rapes by senior researchers from human rights institutions at Harvard and New York Universities. These researchers testified about their findings before a Canadian parliamentary committee in 2009 and 2010, and filed a substantial report in 2009.

â€œBarrick has chosen for many years to ignore the urgent warnings the company has received in both written and verbal form about serious human rights problems associated with its security forces at the Porgera mine,â€ says Catherine Coumans of MiningWatch Canada. â€œThis new report by Human Rights Watch appears to have finally moved Barrick to take some actions that may prevent abuses in the future.Â  We hope that Barrick is now also prepared to consider reparations for people who have been harmed by its security guards and will be more open to dealing with other environmental and human rights concerns at the Porgera mine.â€

Coumans further notes, â€œThe Canadian government has also ignored information it has received about the human rights and environmental concerns at Barrickâ€™s operations in PNG. Porgerans have met with civil servants of CIDA, Foreign Affairs, and Trade a number of times starting in 2008 and raised these issues directly with them. Nonetheless, in 2010 CIDA provided $158,241 for a Barrick reforestation project in Peru, with more payments to come. With the defeat of Bill C-300 the Canadian government can continue to ignore complaints about human rights abuses and reward tax payer dollars to projects at the mine sites of Canadian companies against whom serious accusations have been made.â€