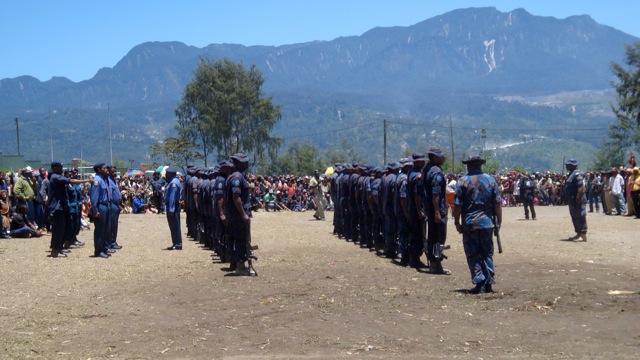 POLICE have begun arresting terminated employees of the Porgera Joint Venture (PJV) implicated in alleged sexual assaults against women and other serious crimes, with many more terminations and arrests expected in the coming weeks.

Acting Police Commissioner Tony Wagambie and PJV announced this yesterday, stating that this is a result of a three-month investigation by a special police team set up last year by then Police Commissioner Gari Baki in the Porgera District and an internal investigation conducted by the PJV in line with the mine’s zero tolerance policy regarding employee behaviour of any kind of violence or human rights abuse against women and men.

Those terminated also include employees who knew about the assaults but failed to report to authorities, as well as those who allegedly misled investigators.

PJV said it expected its employees who saw or heard about such acts to immediately report to the appropriate authorities.

Mr Wagambie has warned he will not tolerate any kind of violent and criminal behaviour against women “on his watch” and perpetrators will be brought to justice.

“Enough is enough. These arrests send a strong warning to those who would assault the most vulnerable members of our communities â€“ women and young people â€“ that their actions will not be tolerated,” he said.

“The warning is clear â€“ respect the human rights of others and follow the laws of this land, otherwise we will find you and we will bring you to justice without fear or favour,” He said after receiving solid intelligence on these matters from the mine mangers of Barrick Gold and their independent investigators, the police moved in quickly to identify the alleged offenders.

“The mine took immediate actions after the disturbing results of an internal investigation into allegations of assaults and other serious crimes,” said Barrick executive general manager Mark Fisher in a joint statement from Barrick Gold Corporation and Mineral Resources Enga.

“We have terminated employees who were found to have breached out strict code of conduct regarding employee behaviour.”

He said PJV asked police to investigate when it received credible allegations in June last year. PJV also asked Ila Geno, the former Chief Ombudsman Commissioner and a former police commissioner to conduct an independent inquiry into alleged violence against women and report the findings directly to police.

This team spent several months at the mine interviewing more than 650 employees and conducting a comprehensive investigation of staff and procedures.

“We have been working in close co-operation with the PNG police and we will continue to provide information and support to aid in their criminal investigation,” Mr Fisher said. “We condemn these alleged crimes in the strongest possible terms and wish to see anyone involved brought to justice under PNG law.”

Meanwhile, Mr Wagambie has revealed that investigations into other reported cases, including alleged abuses by police in the same area were continuing.

“No-one is above the law, even members for the Constabulary. Make no mistake – we are coming for them too. The best course of action for anyone who has information about these matters, or who has witnessed assaults or sexual assaults on women and young girls is to come forward now and report these matters to police.

“Don’t be afraid to report these things â€“ staying silent helps nobody.”